Please Select a Section to Skip to

Scion will be releasing two new cars this fall, the 2016 Scion iA and the 2016 Scion iM. Critics say that this is Scion’s way of making a comeback into the American market. So let’s explore these two new vehicles and learn why everyone is so excited about these future models.

The 2016 Scion iA is the first ever sedan to come from the Scion line and it’s causing a lot of hype. If you like a smart, practical, and fun 4-door sedan, this is the car for you.

For those wondering what it’s like to drive the all-new iA, its 1.5 liter 4 cylinder engine produces 106 horsepower and has an estimated top speed of 120 mph. You won’t hear anyone call this sedan slow. The choice is yours whether you prefer 6-speed manual or 6-speed automatic transmission. With the automatic transmission the iA is expected to get an EPA estimated 31 city/38 highway mpg fuel efficiency. This incredible performance all comes for an estimated MSRP of $16,000.

Not only do you get amazing fuel economy with the iA, you get an interior filled with luxurious technology. One such feature is the 7-inch multi-media touchscreen. It is not only appealing to use, it can also be activated by their voice activation system so you don’t even need to take your eyes off the road. It’s keyless, push button ignition and rearview camera makes driving to any destination that much easier.

For those who prefer the look of a super sporty hatchback, Scion has a solution for you: the All-New 2016 Scion iM. 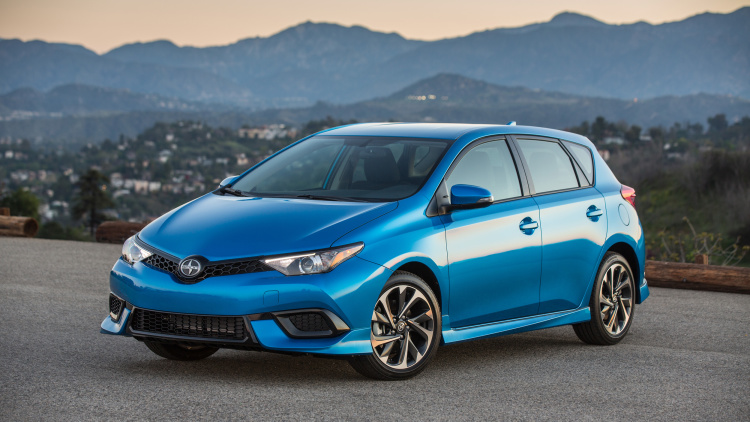 Like all hatchbacks, you expect speed and a sporty handling to be a key feature and the 2016 Scion iM delivers just that. It has a 1.8-Liter 4 cylinder engine capable of 137 horsepower. Yet you still get amazing fuel economy with an EPA estimated 30 city/37 highway mpg. This quality and performance comes at an affordable price tag with an MSRP starting at $20,000.

Like the 2016 Scion iA, the iM also features a 7 inch multi-media touchscreen with a voice activation system attached to it. If you are a fan of music, its Pioneer audio system with 6 speakers should keep you singing along with your tunes. You will not be losing out on comfort either since the iM also has its own keyless, push button ignition and rearview camera to make your daily commute easier.

With all they have to offer these new models will be the talk of the town. So come visit John Elway’s Crown Toyota Scion dealership located at the Ontario Auto Center in San Bernardino County for more information on these new models!

While great effort is made to ensure the accuracy of the information on this site, errors can occur.
Please verify all pricing information with a customer service representative.
This is easily done by calling us or visiting us at the dealership.

Listed below are your saved and recently viewed vehicles

You can also view your saved vehicles on other devices. Sign up

Have your vehicles with you

Save your favorite vehicles for later viewing on your desktop or mobile devices.

Keep track of all the vehicles you've viewed for a better car shopping experience.

Narrow your search by comparing your favorite vehicles.

Get a Quick Quote